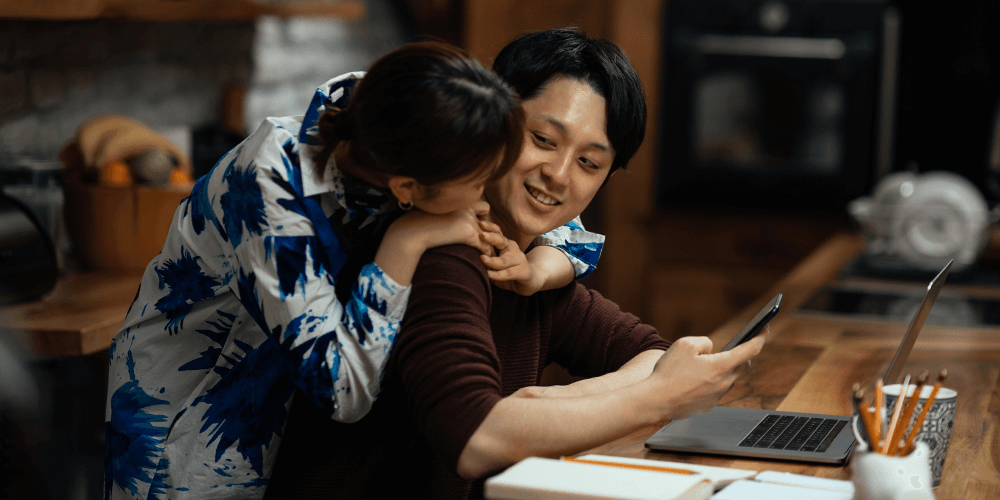 How to say I love you in Japanese

Want to learn how to say I love you in Japanese but have no idea where to start? Here’s how to express your affection for someone in Japanese.

If you asked a Japanese local the question ‘how do you say I love you in Japanese?’, they’d look at you like most people look at a Rubik’s cube: ‘really!?’

The art of saying I love you in Japanese

Did you know there are more Japanese words for rice than there are for saying I love you in Japanese? Cool right? The point is: dropping an ‘I love you’ in Japanese is not as straightforward as you might think…

The ‘L bomb’ is thrown around pretty casually in the West. Married couples say it to each other every day. Friends say it on the phone. And drunk singles whisper it to their post-night-out pizza when stumbling home at 2am...

In contrast: saying ‘I love you’ in Japan is a kind of big deal. Actually, it’s a delicate art. Here it is:

aishiteru 愛してる = I love you Ever heard of the saying ‘actions speak louder than words’? Well, this is Japan’s philosophy for expressing affection. To the extent that some couples won’t say aishiteru 愛してる in their lifetime! Yes really. So before you shout out ‘I love you!!!!’ in Japanese to the nice people you meet on your travels… remember that saying aishiteru will get you this look:

But hey… nothing wrong with being a romantic

Cultural differences like this are always important to remember when learning a language, and especially when learning Japanese because of some of Japan’s cultural etiquette rules. For example, public displays of affection are frowned upon and Japanese men often consider it emasculating to confess their love – keeping to their reserved appearance.

So instead of shouting ‘love you!’ to their loved ones as they leave the house (like Western romantics), Japanese couples have more of an unspoken understanding – expressed through acts of service: cooking, gifts, tidying, etc. Show, don’t tell.

So before asking yourself ‘how do I say I love you in Japanese?’, take a moment to consider what you’re going to say.

Forget googling ‘how do I say I love you in Japanese?’. Relax – we got you covered.

Different ways to say I love you in Japanese

Simply can’t hold your love in any longer? Here are some ways to shout your love from the rooftops!

How do you say I love you in Japanese?

aishiteru 愛してる = I love you

We’ve talked about this one already. Saying aishiteru 愛してる is the closest thing to a straight-up ‘I love you’ in Japan. Here it is again: suki yanen 好きやねん = I like you very much (Kansai region dialect)

When travelling or working around Japan, it helps to know a few phrases that are used in Japan’s different regions. Those in the Kansai region (around Kyoto, Osaka, Kobe, Nara Hyōgo or Shiga) use suki yanen 好きやねん to say I love you.

Trust us when we say that the moment you taste authentic Japanese food… you’re going to need to know how to say this. As for romantically: it might be a bit much? But the heart wants what it wants! How do you say I like you in Japanese?

As we mentioned earlier, many people shy away saying I love you. This is where the ‘I like you’ comes in handy. 😉 See these popular ways to express your fondness for someone in Japanese:

Add this to your Japanese Survival Kit: suki 好き (casual) or suki desu 好きです(polite) is the easiest and arguably the most used way of expressing your liking for someone or something in Japanese. Just add dai 大 (big) and you have daisuki desu! Easy.

Ah, that’s better. The weight finally off your chest by confessing your feelings without the sinking feeling in your stomach from letting go of your ‘I love you’ too soon.

Use daisuki 大好き or daisuki desu 大好きです (polite version) to say ‘I really like you’ to your crush in Japanese. Fun fact: it’s a common kokuhaku (告白) – a liking confession used to officially start a relationship in Japan. 👀 Give it at least 3 dates (customary in Japan) and if you have feelings (awwhhh 🥰) – try saying it!

*NOTE*: practice this one to make sure you don’t accidently say daikirai 大嫌い大嫌い … which means the opposite: I hate you!

How do you say I miss you in Japanese?

aita 会いたい= I miss you/I want to see you

We suspect this will be your reaction after reading this blog post. 😉

But don’t worry: you’re on your way to learning Japanese and you should be proud of your efforts! So let’s keep it going. We’re not going anywhere.

Jokes aside. The best way to say I miss you in Japanese is aita 会いたい which means ‘I want to see you’. See this popular Japanese song to see what we mean:

Another way to say this is koishii desu 恋しいです . This is for the real romantics among you as it really means ‘I yearn for you’. Got any love letters planned? You may want to include this.

So there you have it. These are the best ways to express your love or liking of someone in Japanese. It’s always awesome hearing from you, so try these out and tweet us @Memrise to let us know how you’re getting on.

Learning Japanese is within your grasp. Check out these super useful spoken words & phrases by a native Japanese local here and keep practising!