Go ahead and say it wrong

Making mistakes when learning a language is actually doing you a huge favour - don't worry about them, embrace them!

Let’s face it, making mistakes isn’t fun. It’s embarrassing and makes us feel silly. Conversely, when you know how to do something right, you feel good. It makes us feel nestled, safe in our comfort zone where everything’s familiar. Yet what if making a mistake wasn’t actually as bad as it feels?

Picture this: you’re in Spain, enjoying the beautiful summer sun. You’ve made friends with a few of the locals and try to impress them with your beginner-level Spanish. Only, instead of saying tengo calor (“I’m hot”, literally meaning “I have heat”), you end up saying estoy caliente (literally “I’m hot”, but it means “I’m aroused”). Your face goes red, and it’s not because of the heat. 😳

Of course, these mistakes seem embarrassing, but we’re here to tell you that they’re actually the good guys disguised as bad guys. Think Bruce the Shark in Finding Nemo, or Severus Snape.

You shouldn’t worry about making mistakes; they’re actually doing you a massive favour! By understanding why what you said was wrong, you’ll figure out the right way to say it, thus making it more likely to get it right the next time. So, we’ve established that mistakes can be the good guys. Next step is to learn to not be afraid of making them! This’ll grow your confidence, which is how you make progress.

It might seem counterintuitive, but this year, we’d love you to get out of your comfort zone. If that means throwing yourself head-first into language learning, then go for it! Fine-tuning the grammar can come later - connections with people are more beneficial.

Think of it this way: You didn’t learn to swim by reading a manual. In reality, that would be really difficult. Because even if you understand the principles of kicking your legs, moving your arms and taking deep breaths, when you jump into the water, you won’t know what’s hit you (and you’ll probably end up with a mouth full of pool water)

Go on, break the ice

Is booze your best pal?

Imagine another scenario: You’re at the pub, you’re a couple of drinks in and your language skills seem to (magically) improve. You can form phrases like a pro, overthinking grammar problems is a thing of the past, and your ability to hold sparkling conversation seems to skyrocket. If you make a mistake, no worries! You laugh and move right past it. So why is it that the chilled chats you have when you’re tipsy seem to be the ones you stumble over when you’re sober?

The answer can be summed up in one word: Confidence. This confidence is backed by science: The Journal of Psychopharmacology published a study which actually found that alcohol consumption can improve foreign language skills! Now, we’re not saying that you should grab a pint every time you want to practice, but there’s something to be said for jumping in, striking up a conversation and learning from the mistakes after!

They help your understanding

It’s natural to make mistakes when learning a language, so it’s natural to worry about them. Who hasn’t got their pronunciation wrong, mixed up the gender of a noun, or been tripped up by a false friend? (words that look or sound similar in another language that mean something totally different).

But mistakes aren’t something you should worry about. In fact, they’re actually doing you a massive favour. Messing up will make you think about why what you said was wrong. And by figuring out the reason it was wrong, you’ll start to understand the right way to say it.

So, how do we help your understanding? Memrise encourages you to start speaking, right from the off. If you make a mistake when you’re learning new words, it’ll be marked as “Difficult Words”, and it'll be tested again with extra emphasis. This’ll form the beginnings of a home for the information to store itself in your brain. 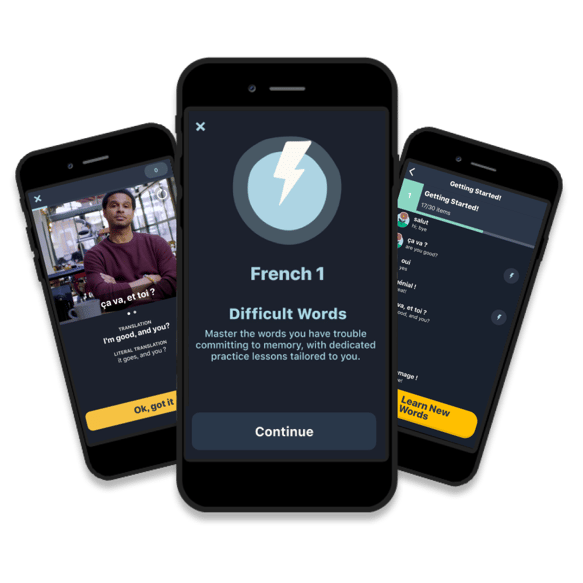 When you put yourself out there with your new language, think about it as an opportunity to learn something new instead of worrying about adding to your own personal blooper reel. Learn how to say “I’m new at this, let me know if I make a mistake” so you’re harnessing their power upfront.

It’s only natural to accidentally apply rules from your own language to the new language you’re learning from time to time. It’s what you know, and hey, it all kind of makes sense in your mind… just not when it comes out of your mouth. But this little mix up has made you aware of the difference and BOOM, you’ve just learnt something new!

That word again! It’s true, another good thing about making mistakes is that when you realise that they’re actually more useful than embarrassing, they give you the boost you need to keep putting yourself out there. The more you make, the less you’ll worry about making them in the future and the better you’ll be.

See your slip-ups as a superpower. Did you get it right? Great. Did you give it a shot and get it wrong? High five and 10 points to Gryffindor. And if you are getting everything right, this just means you have more room to push yourself. You’re ready to move to the next level. And what’s on that level? Good old mistakes.

Every time you review words on Memrise and give yourself a chance to get something right or wrong, the process of searching for the answer lays down breadcrumbs for your brain to store the memory long-term. The more you get something right, the closer it gets to becoming a clear route in your mind.

And if you don’t get it right, it’s no biggie. It just means it’ll stand out, which will help you remember it next time. You’re adding a little mental signpost to point you in the right direction. So if you feel like making mistakes means you’re not learning, don’t worry, you actually are! It’s a win-win situation.

So you’re all ready to boost your confidence, try something new and jump in! We’re here to offer a helping hand with 50% off your first year of Memrise Pro. Grab that offer here. Now go forth, make mistakes (drunk or not!) and not worry about making a pene of yourself!